Montagu on the Hunt For Viking Blood

When Rachel Montagu moved from her birth place of London to Norway in 2000, little did she suspect that she might have roots in Norway stretching as far back as the 9th century. The Montagu name can be traced back to Normandy in France and more specifically the well-known Gange-Rolv 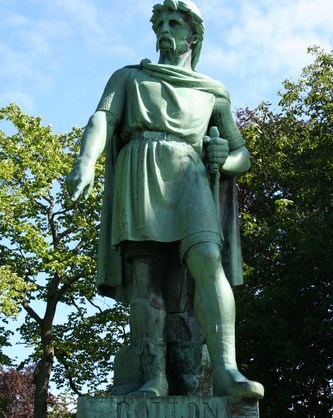 Gange-Rolv has historical significance because he has been identified with Rollo, the first Duke of Normandy. Scholars are not in agreement of Rollo’s nationality, it is claimed he is either Norwegian or Danish. In Norway it is believed he was from Sunnmøre and was excommunicated by Harald Hårfagre, after which he went to France. In 911 he established the county, later the dukedom of Normandy and became the forefather of the Norman family of dukes. One of his descendants was William the Conqueror, who conquered and was crowned king of England in 1066, and Gange-Rolv is generally accepted to be the forefather of the British royal family.

“If the DNA can be linked to Norway, we could – with a convenient Norwegian angle – say that England was conquered by Norwegian Vikings.”

The Norwegian historical foundation Explico has worked since 2010 towards DNA-testing  of two direct descendants of Gange-Rolv. They are buried in a sarcophagus in a Benedict monastery northeast of Le Havre in France, and after having dealt with French bureaucracy for a few years it seems we finally in 2013 will be able to establish where Rollo came from.

If the DNA can be linked to Norway, we could – with a convenient Norwegian angle – say that England was conquered by Norwegian Vikings.

This would give Rachel Montagu the Viking blood she deep down knew she had.

A gift to remember, by coach and mentor Rachel Montagu
Having completed the Process at the beginning of February 2020, I could not be more grateful in these times of lock-down and physical distancing, to have invested in Hoffman.

Read more
Interview by We Inspire
By observing we can thrive

Read more
Interview of Rachel Montagu on board governance by Rosemarie Philips, US
How to properly engage your board for the future: Tips from an expert

Read more
How do new owners start changing a culture?
Research has proven indicative that to create a change in culture the carrot stick methodology of gain versus pain does not bring about lasting change.

Read more
A first step in implementation of healthy governance frameworks.
Mankind is represented in the good, the bad and the ugly. We are after all human and not infallible, although some world leaders, no names mentioned, might argue.

Read more
TED Women, what to wear?
How many of you enjoy packing for work related travel? According to all women I have talked to, my conclusion is, only a few. Sometimes you end up with unconscious shopping because you did not pack what you needed?